(a) Applicability to Particular Proceedings.

(2) Bankruptcy. These rules apply to bankruptcy proceedings to the extent provided by the Federal Rules of Bankruptcy Procedure.

(4) Special Writs. These rules apply to proceedings for habeas corpus and for quo warranto to the extent that the practice in those proceedings:

(B) has previously conformed to the practice in civil actions.

(5) Proceedings Involving a Subpoena. These rules apply to proceedings to compel testimony or the production of documents through a subpoena issued by a United States officer or agency under a federal statute, except as otherwise provided by statute, by local rule, or by court order in the proceedings.

(6) Other Proceedings. These rules, to the extent applicable, govern proceedings under the following laws, except as these laws provide other procedures:

(F) 33 U.S.C. §§918, 921, for enforcing or reviewing a compensation order under the Longshore and Harbor Workers’ Compensation Act; and

(b) Scire Facias and Mandamus. The writs of scire facias and mandamus are abolished. Relief previously available through them may be obtained by appropriate action or motion under these rules.

(1) Applicability. These rules apply to a civil action after it is removed from a state court.

(2) Further Pleading. After removal, repleading is unnecessary unless the court orders it. A defendant who did not answer before removal must answer or present other defenses or objections under these rules within the longest of these periods:

(A) 21 days after receiving—through service or otherwise—a copy of the initial pleading stating the claim for relief;

(B) 21 days after being served with the summons for an initial pleading on file at the time of service; or

(C) 7 days after the notice of removal is filed.

(A) As Affected by State Law. A party who, before removal, expressly demanded a jury trial in accordance with state law need not renew the demand after removal. If the state law did not require an express demand for a jury trial, a party need not make one after removal unless the court orders the parties to do so within a specified time. The court must so order at a party’s request and may so order on its own. A party who fails to make a demand when so ordered waives a jury trial.

(B) Under Rule 38. If all necessary pleadings have been served at the time of removal, a party entitled to a jury trial under Rule 38 must be given one if the party serves a demand within 14 days after:

(i) it files a notice of removal; or

(ii) it is served with a notice of removal filed by another party.

(1) “State Law” Defined. When these rules refer to state law, the term “law” includes the state’s statutes and the state’s judicial decisions.

(2) “State” Defined. The term “state” includes, where appropriate, the District of Columbia and any United States commonwealth or territory.

These rules do not extend or limit the jurisdiction of the district courts or the venue of actions in those courts. An admiralty or maritime claim under Rule 9(h) is governed by 28 U.S.C.§ 1390.

(1) In General. After giving public notice and an opportunity for comment, a district court, acting by a majority of its district judges, may adopt and amend rules governing its practice. A local rule must be consistent with—but not duplicate—federal statutes and rules adopted under 28 U.S.C. §§2072 and 2075, and must conform to any uniform numbering system prescribed by the Judicial Conference of the United States. A local rule takes effect on the date specified by the district court and remains in effect unless amended by the court or abrogated by the judicial council of the circuit. Copies of rules and amendments must, on their adoption, be furnished to the judicial council and the Administrative Office of the United States Courts and be made available to the public.

(2) Requirement of Form. A local rule imposing a requirement of form must not be enforced in a way that causes a party to lose any right because of a nonwillful failure to comply.

(b) Procedure When There Is No Controlling Law. A judge may regulate practice in any manner consistent with federal law, rules adopted under 28 U.S.C. §§2072 and 2075, and the district’s local rules. No sanction or other disadvantage may be imposed for noncompliance with any requirement not in federal law, federal rules, or the local rules unless the alleged violator has been furnished in the particular case with actual notice of the requirement.

These rules may be cited as the Federal Rules of Civil Procedure.

(a) In General. These rules and any amendments take effect at the time specified by the Supreme Court, subject to 28 U.S.C. §2074. They govern:

(1) proceedings in an action commenced after their effective date; and

(2) proceedings after that date in an action then pending unless:

(A) the Supreme Court specifies otherwise; or

(B) the court determines that applying them in a particular action would be infeasible or work an injustice. 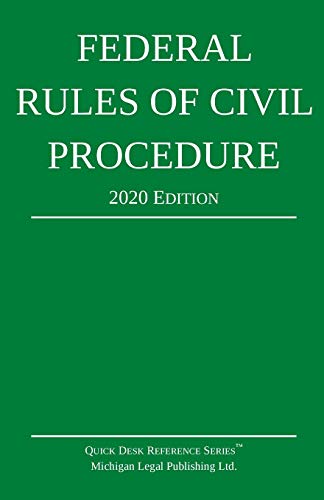 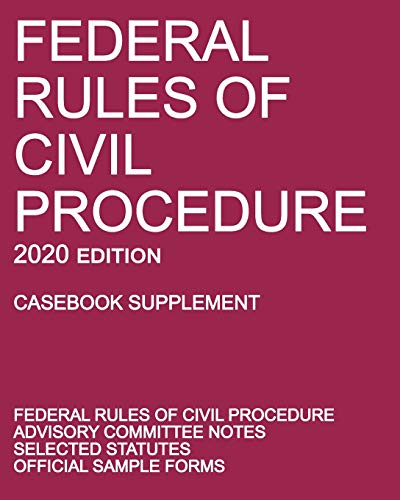 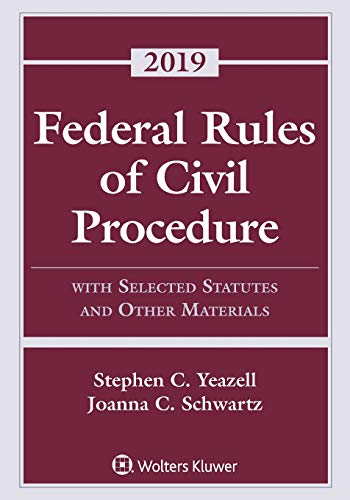 Federal Rules of Civil Procedure: With Selected Statutes and Other Materials, 2019 (Supplements)
$36.73
Buy on Amazon

Try Constant Contact as an automated marketing solution for your law office.

Is Your Name Available? Lock In Your Domain Name Today.

Free court deadline calculators and resources for lawyers, legal professionals, and others.

Disclaimer: The information presented on this site is for educational purposes only. Always check the Federal Rules of Civil Procedure or your state’s rules, if applicable, as well as any local rules or scheduling orders that might apply to your case.